If you’re looking for a high level of amenities with a small-community feel, then White Rock is the place to find your dream home! 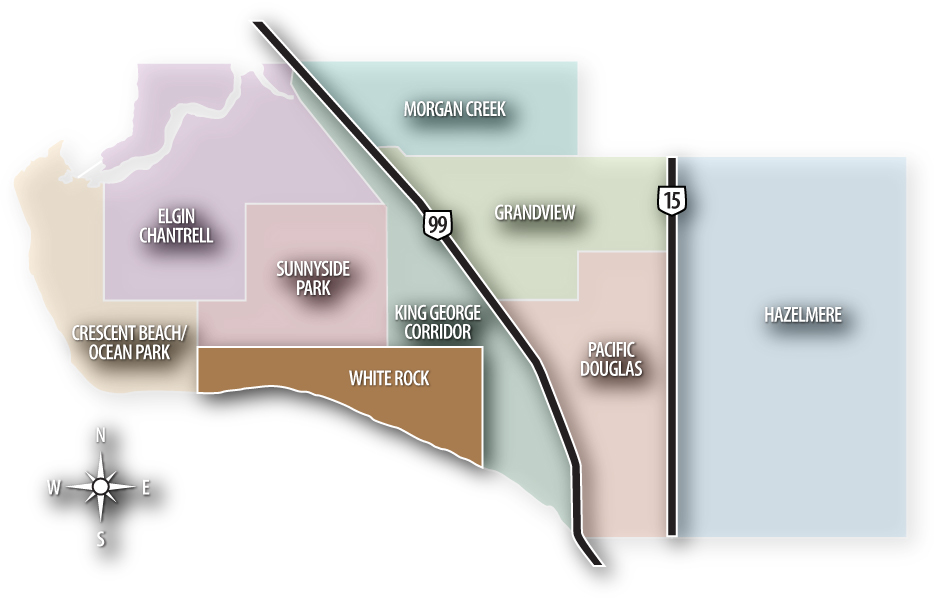 White Rock takes its name from the famous “white rock” — an 11,000 year-old granite boulder left over from the last ice age that found its home in the sun on the city’s beach.  Within a few feet of it is the area’s famous 1500-foot pier, which opened in 1914 as a dock for coastal steamships.  It was thought that White Rock might become a major seaport, especially since The Great Northern Railway arrived there around the same time.

In the early 1900s, the city’s beaches were a favourite spot for large community picnics hosted by groups such as the Bartender`s Union, the Salvation Army and Sunday schools. The latter involved some 1,000 Surrey public school students attending a picnic on White Rock beach in 1922.

White Rock’s historic train station is larger than most stations constructed in comparably sized communities along the rail system. This was to accommodate Customs and Immigration staff. The city’s lifeblood flowed along the rails, and the station was the community’s heart. Four trains a day rolled into town from either direction.

Introduced in 1911, the three-car Campers Special ran between Vancouver and Blaine from July to October. That service ended in 1925, despite protests from residents. In 1950, the streamlined international service was picking up passengers three times a day on its way between Seattle and Vancouver. Rail service to White Rock dwindled, then ceased in 1975, even though services such as mail and telegraph gave these buildings both social and commercial importance.

One of the few Metro Vancouver beaches large enough to feel uncrowded, White Rock is a summertime destination for area locals and residents heading for a day at the beach.  It is a year-round tourist attraction for international day-trippers, and its long, sandy beach is perfect for wading in tide pools, beach-combing, skim boarding, kayaking and canoeing.  Not to mention, White Rock’s famous fish & chips and delectable gelato are worth the trip alone!

SCHOOLS IN & AROUND
WHITE ROCK

GETTING TO, FROM & AROUND
WHITE ROCK

Whether you drive your car or plan to take transit to school and shopping, White Rock is an easy place to get to and from.
Public transportation via Translink’s South Surrey & White Rock Buses makes it easy to travel to schools and shopping centres, while commuter buses provide easy access for those working in Richmond or Vancouver.

Students who are residents of the cities of Surrey or White Rock, and who meet the criteria, will be considered eligible for regular School Bus Transportation to and from the school which has been designated by the Superintendent of Schools to serve their residence.

If driving is your transportation of choice, you’ll find White Rock is accessible by Highways 99 and 91 from the Greater Vancouver area, and via Highways 10 and 15 from the Fraser Valley.  You can then easily access White Rock using the King George Boulevard or 8th Avenue exits from Highway 99, and turning left onto 8th Avenue from Highway 15 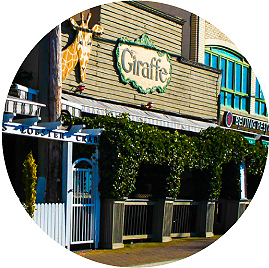 A romantic and cozy waterfront restaurant with a patio overlooking the ocean, Giraffe offers a chance to take in a delicious meal paired with a breath-taking sunset. 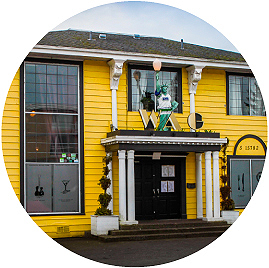 If you’re a lover of restaurants on the beach that have live music and dancing, then the Washington Street Grill’s historic building is definitely a stop to add to your list! 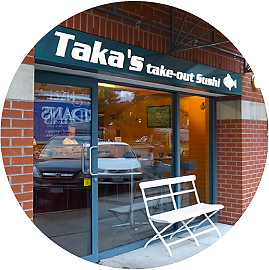 A favourite among White Rock residents and nearby locals, Taka’s Sushi focuses on creative menu items and superior ingredients, with the Nigiri Sushi being a must-try. 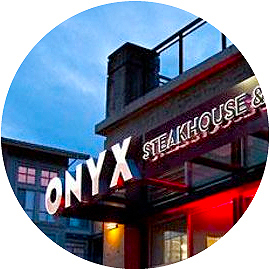 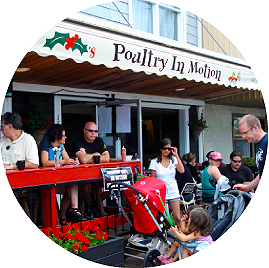 Opening in March 1990, Holly’s has been a staple of the White Rock food scene for over 25 years. It’s a great classic breakfast joint located down by the beach so you can walk off all the carbs later on.

RECREATION, ENTERTAINMENT
& THINGS TO DO

There is no shortage of year-round recreation, entertainment, and fun things to do in White Rock.  With Vancouver’s entertainment district a highway-drive away, this vibrant community has plenty to offer.  Aside from the standard beach and ocean activities, outdoor enthusiasts can take in walking, cycling or roller-blading.  Looking for something different?  The White Rock Lawn Bowling Club is always looking for new players, with its history of being in the neighbourhood going all the way back to 1935.

Theatre enthusiasts will no doubt enjoy the White Rock Playhouse Theatre. Established in 1944, the White Rock Player’s Club has deep roots in the local community. The original theatre building opened in 1960, and has since undergone renovations and expansions. The most recent of those remodels was completed in 2006, after it was selected by the Rotary Club of White Rock as a major historic restoration project. And, their popular Christmas Pantomine has been a local annual tradition since 1954.

Sports and health enthusiasts, fear not — there’s plenty here for you, too! If ice skating, hockey and figure skating are your cup of tea, then Centennial Arena  is the place to be.  But if you prefer to take in art, cooking, music dance, fitness or health and wellness classes, head on over to the White Rock Community Centre.

There are a wide variety of cultural festivals and events to add to your calendar, too!  Start the year off with the Annual Polar Bear Swim, an annual event which for over 45 years has taken place the 1st of every January. The White Rock Sea Festivaltakes over the city’s east and west beaches for 3 days during the August long weekend, complete with entertainment, kid’s activities, a salmon BBQ, a torchlight parade and fireworks

Then, watch Canada’s top cyclists tackle White Rock’s challenging hills in the Tour de White Rock international cycling race. And, what better to celebrate the beauty of summer and usher in the fall than with Concerts at the Park in White Rock.  Performances by local musicians are held in front of the historic White Rock Train Station Museum every Saturday night from July through August. Finish off the year with Christmas on the Peninsula, a classic held at venues throughout the community in late November.  Traditional European activities such as breakfasts, nativity scenes, crafts, carollers, dance lessons and music will surely get you into the holiday spirit!

Finally, if you’re the early morning type and enjoy supporting local farmers and artisans, the Sunday Morning Farmers Market will have you rise and shine in the best of spirits.  Over 70 vendors gather from late-May through early October in the town centre, with goods ranging from baked products to fresh fruits and vegetables.

Rounding out our list of things to do and places to see are some of White Rock’s key points of interest. Come check out the Historic White Rock Train Station, home to the White Rock Museum & Archives. Built by the Great Northern Railway in 1912 and opening the following year, the Station has been a significant building in the community and was designated a heritage site on April 9, 1979.

White Rock boasts a well-supported community of artists, including painters, sculptors and photographers. Many of these artists exhibit internationally, as well as locally, and their works can be seen in art galleries such as the Mikelson Mind and Matter Art Gallery and the White Rock Gallery In the case of painter Elizabeth Hollick, her 50 years of murals can be seen on many White Rock buildings, including the Peace Arch Hospital Auxiliary's Superfluity Shop.

And of course, no trip to White Rock would be complete without a stroll on its expansive, sandy tidal beach, which welcomes residents and locals to go swimming and beach-combing.  Take your picture at the city’s “white rock” namesake, stroll along the oceanfront promenade, and finish your day in one of the great local restaurants.

Whether you’re a first-time home buyer, downsizing, or looking for an inviting seaside community with a stunning location and plenty of charm, Glenn can help you find the home you are looking for.  Browse some of the listings available by clicking below.

Can’t find what you’re looking for?  Contact Glenn and his team today for a no-obligation consultation and we’ll help you get the keys to the perfect home in White Rock! 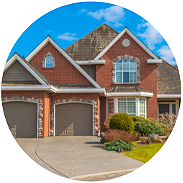 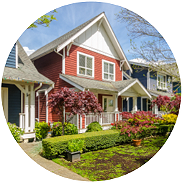 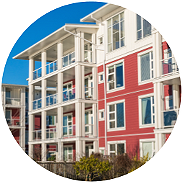 Looking for a home in a specific neighbourhood? Not a problem!
We have an extensive range of properties in these home styles and price ranges in each of the
South Surrey Neighbourhoods, plus a custom search is just a click away!

Create your own Search

We help you stay on top of your market

Let us Take Care of You 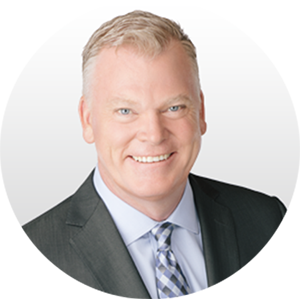 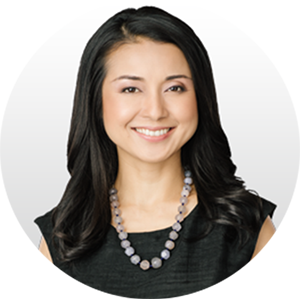 * Based on statistics from the fraser valley real estate board

The data relating to real estate on this website comes in part from the MLS® Reciprocity program of either the Real Estate Board of Greater Vancouver (REBGV), the Fraser Valley Real Estate Board (FVREB) or the Chilliwack and District Real Estate Board (CADREB). Real estate listings held by participating real estate firms are marked with the MLS® logo and detailed information about the listing includes the name of the listing agent. This representation is based in whole or part on data generated by either the REBGV, the FVREB or the CADREB which assumes no responsibility for its accuracy. The materials contained on this page may not be reproduced without the express written consent of either the REBGV, the FVREB or the CADREB.